skip to main | skip to sidebar

This year arts magazine HTV de IJsberg celebrates its 15th anniversary.
I joined the editorial staff in 2004 and I want to present some highlights from my personal HTV archives. In random order.
Issue 58 OPEN dates from april-may 2005. My contribution for this issue was an article containing an interview with visual artist Ted Noten. 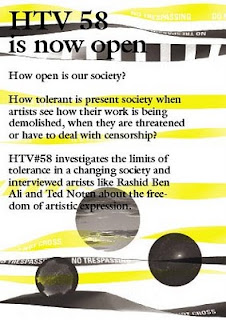 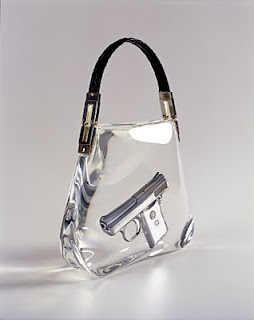 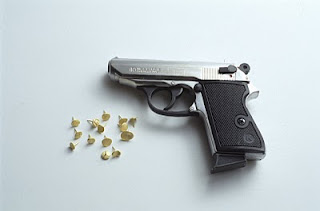 This year arts magazine HTV de IJsberg celebrates its 15th anniversary. I joined the editorial staff in 2004 and I want to present some highlights from my personal HTV archives. In random order. Issue #68 VOC dates from march-april 2007 and was made with guest-editors BAVO.
We had a private launch party for the happy few of HTV on a boat roaming the canals of the Amsterdam 'grachtengordel' elite. However, we did join our broad audience of readers by making a film at Art Amsterdam art fair where we presented issue 68 too.

My contribution for this issue was a review on Ariel Schlesinger. 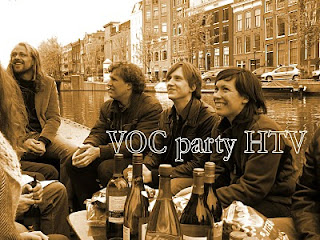 Balkenende is probably still regretting his remark on our fantastic VOC mentality of the old days when everything was so much better than today. His temporary blind spot for exploitation and slave trading has haunted him for quite a while. The fuss it created reminds me of an intriguing piece of art by the young artist Ariel Schlesinger (1980, Israel). It is called Bubble Machine and was recently on view at Galleria Klerkx in Milan.

Bubble Machine (2006) is a low-tech bricolage installation created out of a whole bunch of materials and recycled goods: wood, electric drill, ladder, soap, cooking gas, grill, transformer, stool, and glass. From the top of this Bubble Machine small soap bubbles escape in a rhythmic fashion. Just when you’re off guard admiring the beautiful soap bubbles, dreaming away to happy childhood memories, it hits you right in the face. The bubbles are filled with gas, so they explode when they hit the grill below. A nasty wakeup call, a reminder that not everyone’s childhood is a peaceful experience.

The gas and the exploding bubbles on the grill are provocations that engage us to think about the social-political role of art in our society. The use of soap raises questions as well. Soap is used for cleaning up, to wash one’s hands in innocence. But Brad Pitt as Tyler Durden in the movie Fight Club taught us that soap could also be the main ingredient of home-made explosives. And, according to Durden, the best soap is made with human fat, preferably stolen from a liposuction clinic, so rich ladies buy back their own behinds when they buy this ‘magnificent’ soap.
Those shopping ladies don’t know it yet, Balkenende probably has realized it by now, and Ariel Schlesinger shows it to us with his Bubble Machine: There’s a downside to most things that look good at first glance. 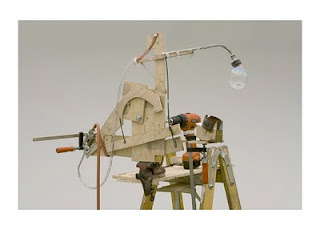 Robin Brouwer interviewing me as one of the exhibiting artists at Art Amsterdam 2007. 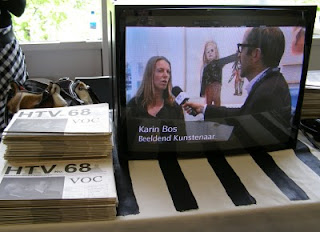 This year arts magazine HTV de IJsberg celebrates its 15th anniversary.
I joined the editorial staff in 2004 and I want to present some highlights from my personal HTV archives. In random order. Issue #71 dates from november-december 2007 and celebrated 12,5 years of HTV. We had a big birthday party at W139/Basement in Amsterdam. 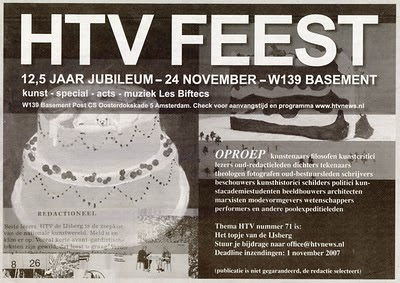 For this issue I did some serious treasure hunting in the archives of the magazine, screened all 70 issues, which resulted in 4 pages of best-of collages: 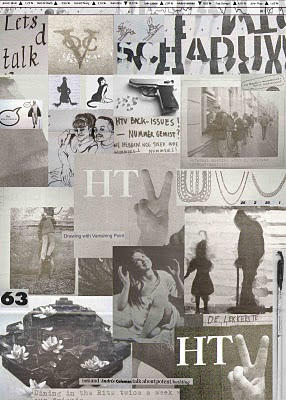 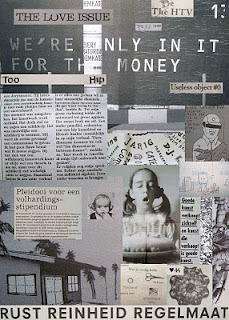 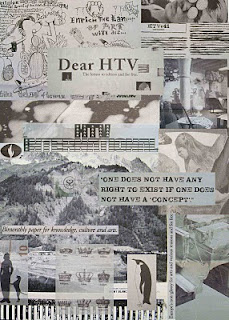 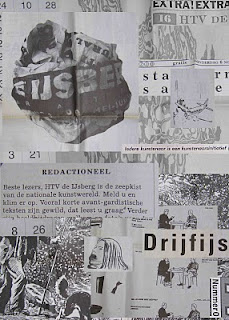 some party pics of the art auction at W139/Basement: 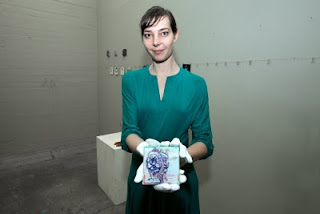 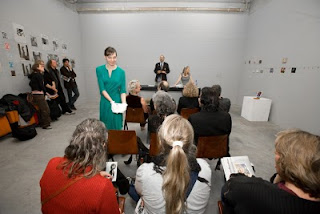 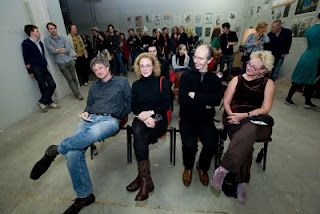 I joined the editorial staff in 2004 and I want to present some highlights from my personal HTV archives. In random order.
Starting with issue 66 from november-december 2006 with guest-editor Sven Lutticken. 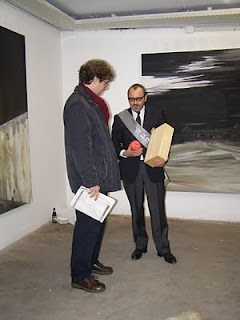 As a girl Hanneke de Jong-Fluitsma was a member of the female Catholic Grail movement in Amsterdam.


KB: “Could you tell me what the Grail movement was exactly?”

HdJF: “The Grail movement stems from before the war, so that’s a very long time ago. It was founded by the Women of Nazareth. They had a cloister in the dunes near Vogelenzang. They dressed in a kind of toga, if I may call it that way, it was a white uniform with a blue belt. There was a Bishop, the Bishop Aengenent, who told them: “You have to do something for the young women who don’t have a lot of education.” For this reason the Grail movement was founded in Rotterdam and Amsterdam.”

KB: “When did you become a member?”

HdJF: “I was around eighteen years old when I joined the Grail movement for Catholic girls. I already was a member of a sports club, but thought; “I want to go there too.” Back then we lived in Amsterdam, I was the youngest of five children and very shy. I didn’t feel like going to college, although I had the brains to do so, and was working as a domestic worker. The Grail movement had five houses in Amsterdam where you could go to every evening of the week to participate in all kind of clubs. I used to bike to the one at the Prinsengracht because that was the nearest one for me. In those days it was still possible to leave your bicycle unlocked on the streets. Membership cost 35 cents a week. We sat on cushions on the floor and every room had a different color theme. In summertime we took bike trips to the countryside.”

KB: “What else did the Grail girls do?”

HdJF: “Before the second World War we went to Berlin by train to stop the war. At every train station the train stopped for half an hour, and there we formed a speaking-chorus and shouted all together: “The world has to convert and God will triumph!” In Berlin we performed a mass play together with the Berlin girls. One year later we went to England by boat. There we performed a mass play too, together with two hundred English girls.”

KB: “What did the Grail movement mean to you?”

HdJF: “The Grail movement has been very important for my cultivation. First we had to learn German and after that we learned English. I even learned Braille. It also helped me to become more confident. Not impudent, by all means, but less timid. We also guided school children. They could sign up and they were raised to Children of the Cross. They wore necklaces with a wooden cross and sang a verse. I still remember that verse: “We are raised to Children of the Cross. Children of the Cross is our name now. We shall never shiver for the cross again. Because by wearing the cross (at that point they raised their wooden crucifixes), we come together.””

KB: “How long were you a member of the Grail movement?”

HdJF: “Until the second World War. The war made an end to the existence of the Grail movement and afterwards it wasn’t restarted. People thought of it as being old fashioned and out of date. There even used to be a division in the US, but it was totally diluted. Personally I think it is a shame, because the Grail movement has done many good deeds and it has meant a lot to many people.”

KB: “Are you interested in the symbolism of the Grail?”

HdJF: “The Grail has a different meaning nowadays. We were told about the quest for the Grail, but it wasn’t emphasized, it was not important. I am interested in symbolism and the arts, but unfortunately I miss out on a lot these days. It is not possible for me to visit everything I would like to anymore, and I do feel a little trapped sometimes. After all I am almost ninety-three years old. The mind is still willing, but the body less so.”